There is much speculation as to the exact meaning Jesus intended with these parables, so I am thankful that with the children all I had to focus on were the concerte facts, since no interpretation from Jesus is given in Scripture. We went with the principle of mustard seeds and yeast, both being tiny but causing a significant change or influence.

How we covered the lesson was with objects. I brought in my container of mustard seeds from my spice rack, and the packet of opened bread machine yeast from my refrigerator, and we looked at each in turn.

First I gave them each a mustard seed and told them that God's kingdom is "like this". So I drew them in with the objects and then I read the verses to them from the Bible.  The girls were huddled around and quite interested, as we speculated about the meaning. I also showed them a photo of a middle eastern mustard "tree" (it's really a huge shrub) and explained it in terms of the room we were in to give perspective. We dwelt a while on the miracle of such a huge plant within such a small seed.

For the companion parable, I opened up the yeast packet and let them have a look inside. We talked briefly about how just a small amount placed in 3 cups of flour plus a bread machine makes tasty bread. And then we ate fresh yeast bread, which was quite a hit, and showed me I should be thinking a bit more about snacks in general, but also about relevant snacks. What was a bit of an intimidating subject went over well. 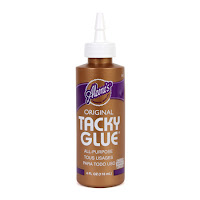 For craft--which is, as of this week, a new feature of our time together--we made seed mosaics or seed pictures using Aleene's tacky craft glue (way stronger than school glue, which wouldn't hold heavy seeds well and takes too long to dry, besides being messy) and mixed soup beans from the bulk section of the grocery store. I bought about two cups to get a good variety and number of the different types, which included some that were a nice mustard yellow.  I gave each child a piece of cereal-box-weight cardboard and let them create, although next time, I will pre-cut at least simple shapes such as circles and triangles to keep things contained. Only the oldest got the concept of the mosaic. The others did enjoy choosing beans and gluing them carefully, though.

Color pages were scarce. None of them really moved me, but I did find an activity page (below). I re-created the color-by-number myself, since it was originally in Spanish. Microsoft Paint was a very helpful program for that little job. I also included a sequencing page for the younger ones on bread baking. One just coloured it thoroughly while the other willingly received input from the next oldest child on the order and enjoyed cutting them apart to do so. 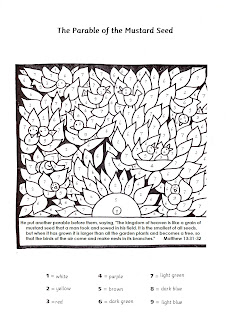