I told the story of Ruth this past Sunday, and I am absolutely pleased with how it was received.

Almost everyone ended up doing artwork related to the text or made something to give to someone else, as we wondered about showing kindness to family and strangers. I love observing this spontaneous response.

I had no source for this story originally, and I didn't want to purchase a script blindly. I did find a very nicely told story of Ruth in this video by Alvan Kaunfer, a Jewish storyteller using the same method, and I made a transcript of his presentation verbatim (minus the Hebrew, of course). I thought it was that good.

You can easily see the pieces necessary to tell the story. Instead of skittle people, we combined figure patterns from all of the books I own. They turned out beautifully.

We had a bit of trouble finding something to use for "barley"  that would hold up to repeated handling by curious hands, but eventually we got some rubber-plastic wheat filler at Michael's. The bits I cut off are very small in comparison to what I bought but I plan to use other parts of it for a couple of the parables. Real grain would have been fun, but this is also less messy; always a plus.

The wondering questions were something I had to give some thought to. Our time of wondering wasn't as free flowing as it was last week with Moses, but everyone had interesting insights. It did take some time for a few of the children to think about how they had been kind or how God had been kind to them, but it was worth the wait.

The script with all the wondering questions is below. Our scripture reading was Ruth 2:8-12.

script: The Story of Ruth


This is such a beautiful story. I hope you enjoy telling it and watching the response unfold.
Posted by goodbye29 at 6:10 PM No comments:

This enrichment lesson on Moses comes from I Wonder... More Stories for Young Children and Worship. This is an excellent book, in my opinion, and I am so glad I found it.

I find that children who have parents who read from the Bible to them welcome these stories not covered in the Godly Play or YCW books for the school year. Godly Play goes through the life of Moses more completely, but it is all in one lesson and a bit more challenging for the younger children to really play with, as it is more of a time line.

These objects from Godly Play in the UK were an inspiration to me. I particularly used the baby, the ark and the burning bush, but all for different stories. My burning bush looks almost identical to this one, actually. Last summer I tried it plain but the effect was really lacking, and the idea in the I Wonder book was for something I think would be less durable. So a couple of weeks ago I got out the paints. Much better.

The children in our church like this story, and in particular they enjoy pulling out Moses' staff and laying it in the sand and putting it back; so much so that we broke two staffs in a very short time. I hit the Dollar Tree and found this 100-pack of small, thin craft dowels the same size, so hopefully the story will now get good use, since it was last played with when the last staff broke. 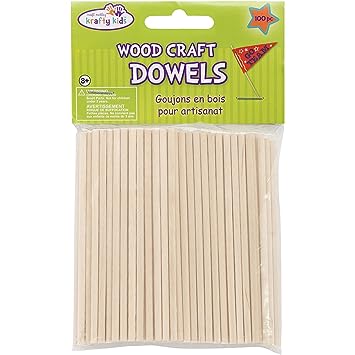 It doesn't require this in the story text, but I used our Mount Sinai in the desert box when I told this story this time, since it is part of the biblical text. It had a great effect.

One thing I appreciate about telling some of these biographies in shorter increments rather than one long narrative is that the children remember them better.

Have fun with Moses and the burning bush!

So...over the last year we basically just covered all the stories we have done from YCW the first time I worked through it. This is somewhat like reading through the Bible again after you finish. There is always something new to learn.

Some of the re-tellings were well-received, some less so. But hey, I figure that's what it's like with the Bible in real life. We read not to get our ears tickled, but because "man lives... by every word that proceeds out of the mouth of God" (Matthew 4:4).

This summer, I was looking to spend our weeks covering some of the famous narratives that aren't in the curriculum. Godly Play does have these narratives, but I feel that they are less appropriately presented for my group, and with some, like Daniel, I'd like to spend more time "playing" with them.

We are planning to tell the following Old Testament stories over the course of the summer:
I hope to be putting up what I have for these as the summer progresses. My heart is full of excitement and anticipation of what God is going to do with the little hearts in my care through His Word about these amazing people of God from Old Testament times.

I was so pleased to find a version of Joseph! I found a fantastic script and presentation for the life of Joseph here. I particularly like the story cloth (pictured below).

This was a more involved story to prepare for, since I needed to buy the fabric and make a pattern for it and sew it together, but it really gave me alot of time to meditate on the story itself. I used fabrics like those pictured, but just cutting and gluing felt onto a larger felt back would probably work just fine for people who don't sew. 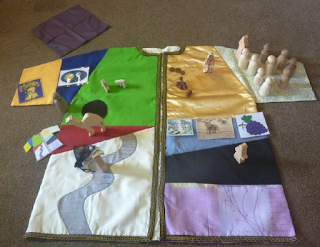 Figures
My husband is a gem and cuts all my figures. I used an image of the same Pharaoh who was ruling at the time of Joseph, but I didn't color it in (contrary to the photo above). We also just used his figure without the paraphernalia in his hands and on his belt.

For Joseph we used the priest figure from Young Children and Worship session 13 and for his father Jacob we used the nativity Joseph from session 22 (hope that makes sense). The Ishmaelite trader is Zaccheus from session 34, and the camel is also from the nativity session 22. Some mix of Jesus' disciples from the New Testament stories works well for Joseph's brothers.

Due to copyrighting, I can only say where I got these from in the book.  Of course, you don't have to have cut figures at all. They can all be skittle people, as suggested for Joseph's brothers, but I have found that when the figures are less realistic they are not used (tried it once in a pinch for time and NO ONE used it until we cut realistic figures). This may not be an issue for you.

A jig saw is a low cost tool, and clear pine from a home improvement store, some safety gloves and sandpaper are all you need to make figures cheaply yourself, possibly more cost effectively than skittles. But again, it is not a necessity.

"Dreams"
I also have the images for the dreams in the story of Joseph here:

I am taking two weeks to tell this story, as suggested, to keep them from getting lost in the length of the narrative. It kind of builds suspense. Hopefully soon I can get my things together for Ruth to share with you, as that is just 3 weeks away. We already have Baby Moses and Moses & the Burning Bush from last summer. Until then, enjoy this version of Joseph's story.