If there's one story I remember from Sunday school growing up, it is Jonah. Probably Jonah and Noah are the two most famous in my memory, at least from the Old Testament.

Unlike many other scripture narratives, the story of Jonah is meant to be more light-hearted, even absurd, which is the interpretation given by a storyteller on this blog (recommended).

I really wanted to tell this famous story, but I did have a hard time with it, because it is part of the Godly Play® regular curriculum and I do not own the books for any of them. (They also don't come with patterns, unlike Young Children and Worship). I also don't use it in my regular schedule. The story is totally not new, but it was new for us.

I did end up using the basic GP story, but I learned it from watching a couple of other storytellers. I really liked how this woman used her hands.

I also made the pieces I needed myself. The waves were the hardest part to get, but eventually I found a clip art piece, and it worked perfectly.You are welcome to the patterns for Nineveh and Jonah as well.

We used a bright turquoise/aqua underlay and a rust-colored shore. It resembled the maps in the back of many Bibles, which is why I think we were drawn to choose it over a darker blue. Our waves are also aqua. It has a very beachy feel. 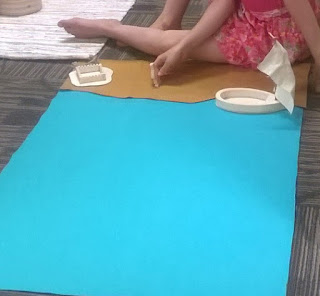 One thing that draws children to this story is putting Jonah in the fish and spitting him back out again. Godly Play has a very nice wooden fish, but we couldn't make that with our jigsaw. I did find a nice pattern, though and made our from denim off a pair of unrepairable jeans. It was tricky to sew the mouth open (not part of the directions) but it worked. I got my idea from the post linked here, but the tutorial here has a pattern. 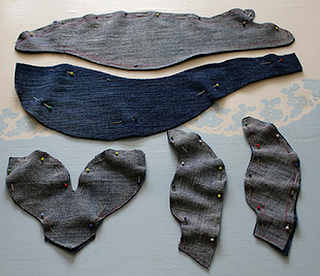 For Jonah's "mercy" plant, I used an aquarium, weighted tuft of grass. Just the right size for our grumpy prophet.

The children did make a comment about how Jonah was a giant compared to little Nineveh, but given the scale of the whole story I think it was not a huge difficulty for them. The story is from Jonah's perspective anyhow, so if he, being up on the hill outside the city, was looking down on the city, it would be "smaller" from his vantage point.

This was a fun story to tell and wonder with the children about. It has seen alot of use since appearing on our shelves, especially by the younger children.
Posted by goodbye29 at 11:30 AM 1 comment: