A Tale of Two Prayers

This week's lesson is the Parable of the Pharisee and the Tax Collector. I was surprised to find quite a few resources on this subject.

Presentation
The presentation for this parable is like many, very simple. Two figures, some cynlinder-shaped blocks and a background. I tweaked my simple figures to have chenille stem (aka pipe cleaner) arms, so that the Pharisee has arms raised, as noted in the parable, and the publican has hands folded or near to his heart, also as noted by Jesus.

Song
I taught them Humble Yourselves in the Sight of the Lord and used simple hand motions. They were willing, quick learners and have enjoyed this new element to our class time.

Object Lesson
It's been months since I used a good object lesson, but a good one is always memorable. This uses only a balloon, or maybe two, if you want to really expand on it. The concept is to re-tell the parable (either exactly or using examples of thinking relevant to children in your class age group. Blow each balloon only part way up, like a normal "head". You can also draw a simple face if you have a Sharpie marker, but it's not necesssary. 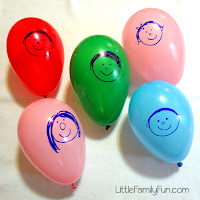 As the pharisee or proud character develops add increasing breaths of air to the balloon so it is puffed up and huge, but keep the second ballon as-is (if you use it). Talk about what's inside the big ballon (alot of air, nothing) and what will eventually happen to it (burst, self-destruct). Ask about the second ballon (less likely to pop at all, even with a pin, since it is not "puffed up with pride"). Then make the application.

There is a fabulous example of this ready for you to use from Christianity Cove here.

Craft
I chose paper bag puppets, because they are utilitarian, the children can retell the parable to each other in class and possibly at home, and it is a visual reminder of the lesson, if the presentation is handled well (esp. in drawing out the questions at the end).

I found this example that I will modify. (The monk will have a full hat and be the tax collector and the "mother Theresa" will have a dark blue or black body and be the Pharisee.) Supplies are bags, construction paper, glue, scissors and bobble eyes.

Coloring/Activity Sheet
You have probably noticed that I make a point to include at least one sheet per week. Some people think of coloring/activity sheets as "busy work", in a negative sense. They are more than just time-fillers, though they do fulfill that role; however, I believe it is secondary to re-enforcing the message of the lesson, especially if the sheets are well-produced.

The coloring sheet I chose for this week is below. It so clearly depicts the postures of pride and humility. 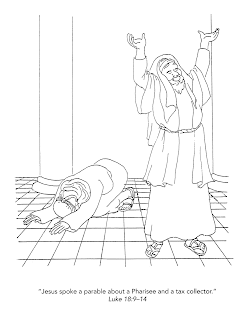 There are many activity sheets for older children such as crosswords, word scrambles, word searches, etc. at Sermons4Kids.com.

Snack
For our snack, I had a few ideas. "Resurrection rolls" from the Easter lesson would serve as a nice object lesson, since they are empty though they are all puffed up, like the pride of the Pharisee. In the "Little House" books, Ma bakes vanity cakes; same idea.

I also found a nice, seemingly child-friendly recipe for humble pie at Cooks.com, but the weather is on the warm side and I chose not to heat up our house any extra. So, I settled for jello, a very tummy friendly option. The idea is to have jello cups, lids on. Then, while they start to eat, you ask:

What's on the inside of your snack?
How do you know it's there?
Why doesn't what is on the outside hide it?

Then talk about how sometimes we try to hide what is going on in our hearts by showing something different on the outside. When we do that with God and pretend that there is nothing wrong, it doesn't fool God because He sees our hearts and knows what is there.

You can use commercially prepared Jell-O, which I don't think is the best for anyone, especially young children, or prepare your own. There is a fabulous recipe (including flavor variations) at Out of the Box Food which works very well and takes less than 10 minutes to get into the refrigerator. I made some strawberry gelatin last summer using the same principle, but from this recipe.

Extra Materials
If I ever have a permanent classroom and get to teach through these again as a full curriculum, I want to have other materials also on the shelves that deal with each parable and further the point. This book, Fool Moon Rising, is definitely one that interests me on this topic.
Posted by goodbye29 at 9:00 AM No comments:

Parable of the Persistent Widow

This week had even fewer selections than last week for my class, but I am very happy with how it's going nonetheless.

The parable of the persistent widow, from Luke 18, is something that may seem to exceed a young child's capacity to understand, but Jesus taught in parables and never disallowed children to be in His presence, so even though they may not grasp it, I think it's important to introduce it, and I think I will revisit the parables curriculum I'm developing now when the children I am teaching are several years older. The key to learning is repetition, and I don't believe these presentations get "old" for children any more than they do for us. Jesus told timeless stories, and they really are the best (which is understandable, since He is communication itself, as the Word of God).

That being said, here's what I've got for this week:

We will be having a simple presentation on a gray felt underlay with two figures.

I didn't find any good coloring sheets. One showed up on a search that is the same style as some others I have, but to me it didn't depict the parable or its message. However, there were several other sketches that were in the image search and I ended up combining them into this coloring page (see below). I don't know who the artist is, but I like the work (if anyone knows, I will happily give credit where it is due). 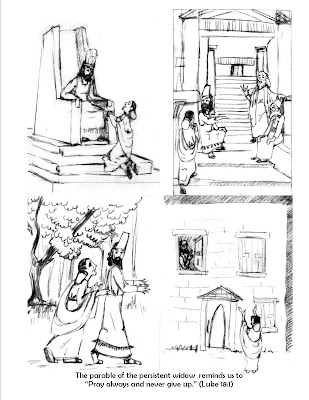 For a snack, I saw only one idea, but I really like it. It is a "gavel" snack made from a pretzel stick inserted into the side of a small rectangular candy bar, but I will use a lower sugar, more natural food bar of some kind. It doesn't fit the message of the parable, but it is staying within the theme, and a gavel can serve as a reminder that judgment was given (and request granted) in the end.

Crafts on the theme of prayer are obviously in order. Use what you like. I'm just scrapbooking my ideas here. I liked the prayer pail best. It is something to "do", i.e. pray - which is the point of the lesson - so I think it will be motivational for the children to use after they create, much like the Compassion Rolls from a previous parable. It is a simple craft, and I have all the supplies, so that is also a plus. I will use small metal pails from the dollar store (they were with the wedding favors) and small craft sticks. The children will tell me names or needs and I will send a few blank ones for their parents to add to (or correct my misspellings of names) at home. Then I'll let them decorate the pails with ribbons and stickers, most likely. 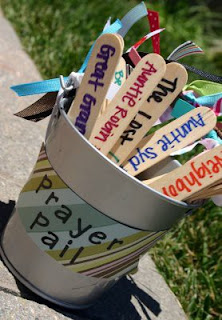 This picture is what inspired me (I later found it posted here), but there are many queries for it search engines. A prayer pail like the one here could also be used in the classroom on a regular basis.
Posted by goodbye29 at 9:04 PM 2 comments:

Parable of the Insistent Friend

So I had the hardest time getting components and inspiration for this parable. Pickings are rather slim for the less than famous stories of Jesus, and even artwork is lacking compared to, say, last week's. I managed to find a few things, but I had to make up some of my own parts, which, I guess is not terrible.

Story
I used the dark blue felt underlay from last week's parable, since this also takes place at night. I had several wooden figures: a man, woman and three or four children who were all laying in the bed from our doll house. These were set up inside their "house" along the path that was spread over the underlay. Then I had another man figure who was the friend, standing just outside the door. The whole "house and door were just our parable box because I couldn't come up with anything else.

I told the parable using the basic text from Luke 11, then asked lots of questions at the end. You can get the script here:


script: Parable of the Insistent Friend

Song
After the lesson presentation, we sang "Ask, Seek and Knock" by WonderKids, using simple hand motions. One hand was the door and we knocked with the other hand. I sang it with them and it was very quickly learned.

Craft
For our craft we made a moving coloring picture that I ended up creating myself from various components I found online. The friend's hand knocks by the action of a brad attached at his shoulder, and the door is openable as well. The template is available through the link below. 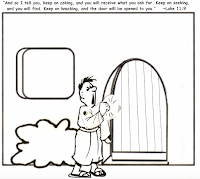 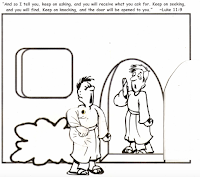 
Coloring
Here is another coloring page that I cleaned up and made available, but they were more interested in the craft, so we did it and I sent the other one home with them. 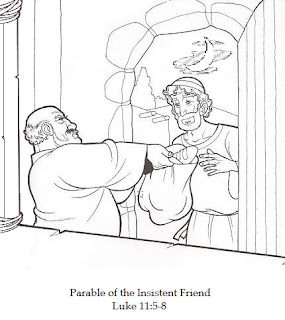 Video
A nice little animation of this parable was on YouTube, but it was in Spanish, and it was made to go along with the song that was written just for the animation. So I spliced it with "Ask, Seek and Knock" and it was perfect.


Snack
Since preparing went slowly and I ended up spending a while on designing and assembling the craft, I didn't have a snack. However, I probably would serve biscuits or rolls, since the parable ties it in, and I would serve it in a small bread basket.