I have had many, many thoughts about how to fill in the Sundays from my scheduled curriculum until the start of the next year's cycle in the middle of August. There were several possibilities I explored, but in the end, I decided to use the four stories that were only lacking in one existing in-print story script with figure patterns. Life in summer is so busy, and this was the simplest path. So for the four weeks we have available we will be covering Moses and David in the following summer lessons:


I was so thrilled when I found I Wonder... More Stories for Children and Worship when I was in the initial stages of considering whether or not to adopt the sensorimotor curriculum (since financially it seemed to be potentially out of our budget ability as a baby church), and I ended up ordering it.

There are many "extra" stories in this book, as well as a sample schedule covering a several year span to incorporate them. The only story not in this line-up is Baby Moses, but I felt confident someone had already done it, so I searched, but again, not much was around.

I found some wondering question samples in one spot and a couple of simple script ideas in another, but nothing concrete. So, as is my custom, I made one myself. Using patterns in the back of I Wonder... I sketched figures. From the sample story lines I designed a script. I am making them both available to you here to freely use in your homeschool, Sunday school, or worship center. If you'd kindly link back to this blog, I'd be grateful. Enjoy!! 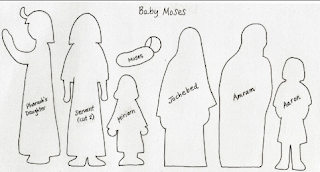 The story of Baby Moses has been one of the most used stories in our classroom over this past year. I don't know if it is because it is about a child, because it is so "famous", because they really like the little plants to put in the sand or putting the baby in the basket and into Pharaoh's daughter's arms. Whatever the reason, I am so pleased that it was well-received!

I am also thinking of setting out this craft as an example for inspiration of those choosing to do artwork in response time. Enjoy!